How Diamonds are mined

The journey of a Shimansky diamond begins with an uncut stone sourced direct from the mine. In its rough form it has potential, its size simply a promise of what it might be. Only in the hands of a master craftsmen does the diamond realize its true potential. Each rough diamond is hand-selected for its unique characteristics, before being meticulously cut and polished to realise its true brilliance.

Southern Africa accounts for a large percentage of the world’s gem-quality diamond production. Approximately 13 million carats of diamonds are mined annually, with a total value of nearly US $9billion.

There are three main types of diamond mining: 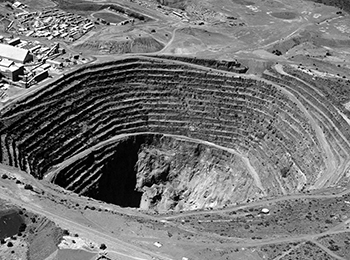 There are two types of pipe mining: open-pit mining and underground mining.

Open-pit mining, such as the Kimberley Big Hole, involves removing the layers of sand and rock found just above the Kimberlite. The ore in the pit is then broken up by blasting. Once this ore is broken, it is loaded and then transported to a primary ore crusher where the diamond extractor process begins.

Miners tunnel through the Earth’s crust to reach the kimberlite pipe. Tunnels are constructed in two levels, one above the other with funnels built to connect the two. Mining begins on the top level by blasting ore, which falls through the funnels and collects on the second tunnel. Here, loaders collect the broken ore and bring back to the surface for processing.

After thousands of years of wind and rain, the Kimberlite pipe that reaches the Earth’s surface gets eroded. Rough diamonds from the Kimberlite get carried downstream in rivers and streams. These diamonds are often found in the gravel layer of other material such as mud, clay and underwater plant life. The Industrial alluvial process involves building a large wall to collect the water in one area, where the gravel is collected and then hauled to the surface and prepared for processing.

Marine mining involves extracting diamonds from the seabed, deep under water. Ships with specialised technology are used to mine for diamonds deep out at sea by using a powerful crawler that sucks gravel on the seabed up through flexible hoses or pipes. In the earlier days of marine mining, a swimmer would collect diamond bearing gravel from the shallow seabed.

Alternatively, they use a large scale drill mounted to the ship to excavate diamonds. The coast of Namibia is the richest known source of marine diamond deposits which account for approximately 64% of Namibia's total diamond production. 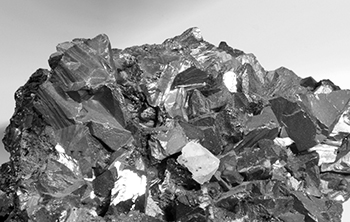 THE PROCESS OF ORE TO EXTRACT ROUGH DIAMONDS

There are 5 different stages in which diamonds are recovered from ore:

Diamond-bearing ore and gravel is collected and transferred to a primary crusher, which is responsible for reducing the larger pieces of ore into smaller pieces that measure no larger than 150mm, and are much more manageable. A secondary crusher (also called a roll-crusher), is sometimes used to break the ore down into even smaller pieces.

In the scrubbing stage, the pieces of ore are scrubbed in order to remove any loose excess material attached to them, and are then screened. Pieces of ore smaller than 1.5mm are discarded, as it is too costly to extract diamonds from such small pieces.

A solution comprising ferrosilicon powder and water is mixed to a specific density, and mixed with the diamond-bearing ore. Once mixed, the solution is inserted into a cyclone, where it is tumbled and, in this process, forced to separate. The materials with the highest density sink to the bottom of the cyclone, and as a result, a layer rich in diamond concentrate is formed.

The diamond-rich concentrate goes through various processes that involve magnetic susceptibility, x-ray luminescence and crystallographic laser fluorescence. These processes are calculated based on the unique properties of diamonds. These processes separate the rough diamonds from the other heavy density materials that were collected in the cyclone separation plant. Diamonds emit flashes of light which are detected by sensors. This sends a signal to a microprocessor, which in turn fires a blast of air in the direction of the diamond. The diamond is then spit into a collection box.

The diamonds collected in the collection box are then cleaned in an acid solution before being washed, weighed and packaged for transportation. Each container is thoroughly sealed as per the Kimberley process – they have a tamper-resistant seal and are numbered on site.