CUTTING AND POLISHING OF TANZANITE

In the rough, tanzanite shows potential thanks to its attractive bluish colour, but once cut and polished, the gem is brought to life, displaying magnificent fire, brilliance and scintillation. Cut by a master craftsman, each single facet of the tanzanite gem is shaped by hand. When you purchase a tanzanite ring, tanzanite necklace, or tanzanite earrings from Shimansky, you can be certain that only the highest quality stones have been used, and that each stone has been cut and polished to maximise its beauty. All of Shimansky’s tanzanite is sourced direct from the mine and is cut and polished in-house in the Shimansky factory with the most cutting-edge technology and highly skilled craftsmen, after which it is set and transformed into breath-taking tanzanite jewellery creations.

The process of transforming tanzanite from rough to polished involves various steps: 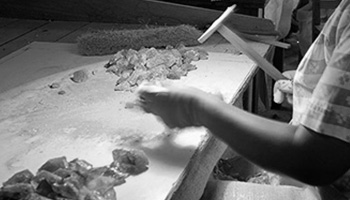 After mining, the non-gemstone material is removed from the tanzanite with small, sharp hammers. This process is known as “cobbing.” 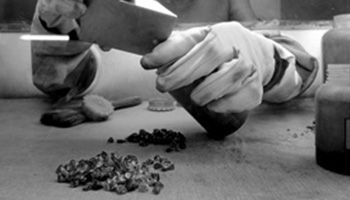 The cobbed tanzanite is weighed and sorted into groups based on colour and size in order to determine value. Through a vigorous and necessary processing, optical and manual sorting system, the rough tanzanite gems are prepared for the stages that follow. 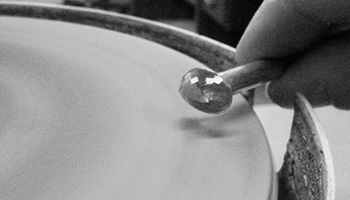 Shimansky’s highly skilled craftsmen examine each tanzanite and determine which shape and cut is best for the gem. The planning process is of utmost importance, as the cutter needs to select a cut that will yield the most brilliance, and bring out the stone’s full potential. A wrong cut can have a massive negative impact on the value of the gem. A ‘window’ is polished into the preformed tanzanite in order to check the tanzanite’s clarity. Before the tanzanite can be cut, it is divided into desired, marked pieces, a process in which markings are made against the planes that the rough stone needs to be sawn or cut.

These preformed tanzanite stones are attached to a dop stick with hot wax, which holds the stone in place for the spinning wheel, where the “bruting” process takes place. During this process, the corners of the rough stone are rounded, and the tanzanite’s girdle is formed (the girdle is the surface which is formed around the thickest part of the stone). Another tanzanite stone, set in a “bruting stick,” is used to gradually round off the corners of the rough stone until it is perfectly round at its thickest part. The dop stick is attached to the machine at precise angles, to achieve perfect symmetry and correct angles. The tanzanite is then cut into the desired shape. A quality check is done at the end of the bruting process to ensure the tanzanite meets the criteria to move onto the polishing process.

The tanzanite is then pushed against a lap (a spinning wheel) to polish the stone. Polishing gives the stone its final facets and it is during this stage that the gem comes to life. The process requires a huge amount of skill and concentration, and it is this part of the process where the stone is given its grandeur. The gem is meticulously checked by the cutter after each facet has been polished; he inspects each facet closely before moving onto the next one. After being polished, the tanzanite is ready to be sent to the Tanzanite International grading facility, where its colour, clarity, cut and carat weight will be graded. Once the grading is complete, the gem will either be sold as a loose stone, or it will be set in a beautiful jewellery creation.

Tanzanite is a unique gem, and requires experience, skill and attention to detail in the cutting and polishing processes. To achieve the optimum cut, the cutter must give the gem his undivided attention, and as a result, it can take days to cut and polish a single stone. The result, however, is worth the effort. Tanzanite jewellery is not only a great investment, but is absolutely beautiful to wear. When buying tanzanite in South Africa, select a stone from a reputable jeweler that has been cut and polished to maximise its beauty and reveal its true potential.