The History Of Diamonds 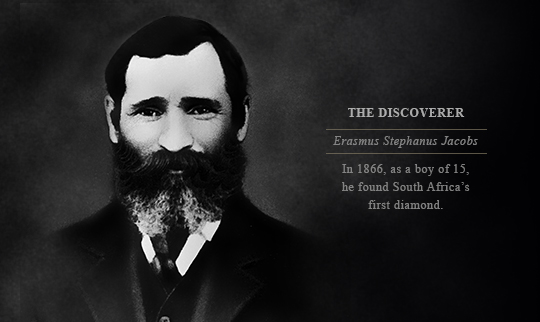 THE DISCOVERER OF THE FIRST DIAMOND IN SOUTH AFRICA: ERASMUS STEPHANUS JACOBS

The first diamond discoveries in South Africa were alluvial, meaning they were found as deposits along a river bed. In 1867, a 15-year-old boy named Erasmus Jacobs found a small transparent rock along the banks of the Orange River, near his farm where he lived with his family. Erasmus showed the stone to his father, who in turn showed it to a neighbourhood farmer, Schalk van Niekerk. Van Niekerk found the stone to be very intriguing and offered to buy it from the Jacobs family. Not realising its value, he sent it, via ordinary mail, to Grahamstown, where Dr. William Guybon Atherstone confirmed that it was a 21.24 carat diamond. It was named the Eureka Diamond, and is the single most important diamond in the history of South Africa.

A few years later, Johannes Nicolaas de Beer and his brother Diederik Arnoldus De Beer, two Dutch settlers, discovered diamonds on their farm. The discovery led to a diamond rush, with people from various parts of South Africa intruding on their land in the hope of finding their very own diamonds. Unable to protect their land from the masses of people flocking upon it, they decided to sell their property. Although the brothers did not become the owners of diamond mines, their name, De Beers, was given to one of the mines, and today, the De Beers name is still synonymous with the diamond industry worldwide. 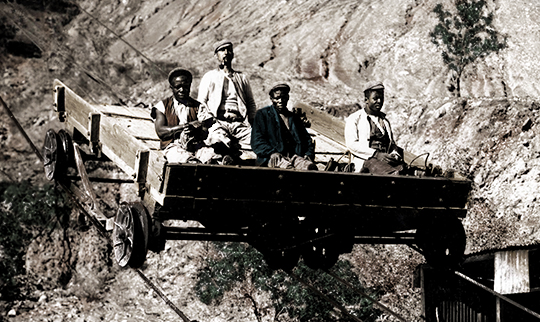 TRANSPORT METHODS FOR MINERS WORKING IN THE OPEN CAST MINE

These events led to the Great Kimberley Diamond Rush, where people from all over the world gathered in Kimberley to make money mining diamonds in South Africa. More than 22 million tonnes of earth was removed from what is now known as “The Big Hole” in Kimberley, and approximately three tonnes of diamonds were removed. The Big Hole is considered the world’s deepest man-made hole. Almost circular in shape with a perimeter of 2km, it is 215m deep, and is situated in the centre of the town. In just a few years, South Africa yielded more diamonds than India had in over 2,000 years, with Kimberley, at the time, being responsible for producing 95% of the world’s diamonds. Today, The Big Hole is a well-known tourist attraction. 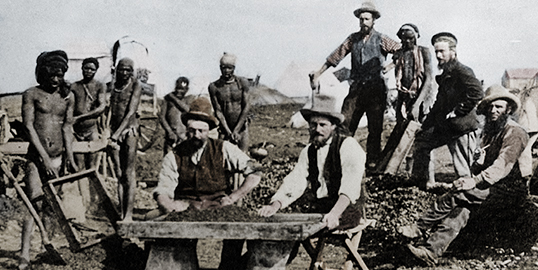 A GROUP OF MINERS WITH THEIR SORTING TABLES, TRAYS AND TOOLS

Kimberley was home to great wealth, and many great rivalries in the 1870s and 1880s. The most notable of these rivalries was that between Cecil John Rhodes and Barney Barnato, who were English immigrants. Both men were the owners of their own companies, and at one stage, both owned shares in the same company. They battled for stock, and in 1888 Rhodes triumphed and merged the holdings of all his diamond companies to form one of the world’s leading diamond mining groups called De Beers Consolidated Mines. Today, De Beers is one of the world’s most successful and well-known companies, and has monopoly over the global diamond industry.

The Eureka diamond exchanged many hands before it was finally purchased by De Beers, who donated the Eureka to the people of South Africa. It is currently on display at the Kimberly Mine Museum in South Africa.

One of the major producers of diamonds in South Africa was the Premier Mine. It was established after the discovery of the Cullinan Diamond Pipe near Pretoria in 1902 and has produced some of the world’s largest and most famous diamonds, including the Cullinan in 1905 (a 3106.75 carat diamond named after Sir Thomas Cullinan, the owner of the mine). Today, two diamonds that were cut and polished from the Cullinan diamond forms part of the crown jewels of Britain’s royal family. 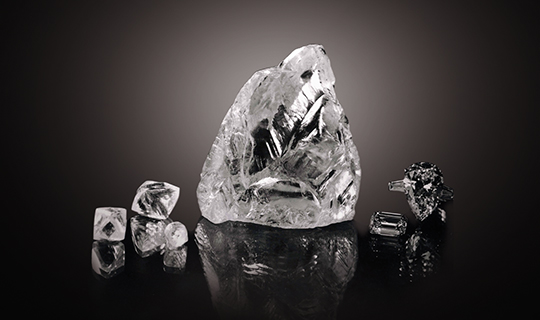 Diamonds in South Africa have a history of almost 150 years, and their discovery in Kimberley made them readily available to the Western World. Diamond mines are a great contributor to the South African economy. There are mines in five of the country’s nine provinces, and thousands of local workers are employed to extract them. The diamond industry continues to be one of the country’s most lucrative industries, and it played a major role in South Africa becoming one of the most economically successful countries in Africa.

Explore the tale of the South African diamond industry on a personally guided Shimansky Diamond Experience Tour. Discover some of the great names in diamond history, including Cecil John Rhodes, Barney Barnato and the Oppenheimer family.

The tour also pays homage to the most famous South African diamonds, such as the great Cullinan rough diamond and showcases specimens of Kimberlite rock dating billions of years old. Life-size replicas of the famous diamonds that have adorned royalty, the rich and the famous are also on display.