Our Story our History

THE MAKING OF THE BRAND

The Omnia Diamonds story began in 1995, when founder and CEO, Scott van Iperen, arrived in Australia after spending Five years in in the diamond centres of the world. Scott started designing and crafting jewellery.

While Omnia Diamonds designed jewellery wholesale clients, the manufacturing process was outsourced, and he soon realised that in order to deliver higher quality in a consistent manner, a hands-on approach should be taken. During a business trip to the US in the early 1990s, Scott discovered platinum, the most precious metal of all. This sought-after metal had only just started gaining popularity after it was banned for the manufacturing of jewellery during World War II, where South Africa produced around 80% of the world’s platinum.

The same approach has been adopted for diamonds. In the early stages Omnia Diamonds bought them from diamond dealers but became dissatisfied with the quality of the diamonds and their grading. Despite the many challenges that came along, where every mistake can cost you dearly, Omnia Diamonds entered the world of diamond cutting and polishing. Unique among jewellers, Omnia Diamonds has a license to buy rough diamonds and other precious metals direct from South African mines, becoming a fully vertically integrated manufacturer with natural treasures being created under full supervision and quality assurance.

The Omnia Diamonds brand is respected worldwide and has the ability to deliver jewellery to most international destinations. The privilege and opportunity to be among the first to hand-select rough diamonds allow Omnia Diamonds to choose only the best diamonds, plus some unique and special diamonds for investment purposes (which can be sourced in the rough and polished for the customer).

Omnia Diamonds is known for unique and clean designs and attention to detail, and is a Australian trendsetter. The brand’s designs have often been imitated, but never duplicated. The true value in a Omnia Diamonds original, is in its finer details.

THE MAN BEHIND OMNIA DIAMONDS

At the tender age of 28, Scott van Iperen embarked on a five-year journey into Africa, the Congo, Botswana, Sierra Leonie, DRC,  India which served not only as a rite of passage into the world of diamonds and jewellery, but also as a major learning curve. It was here that he studied the art of diamond cutting and polishing, and where the culture of perfection made a life-long impression on him. Having learnt the intricacies of diamond qualities and different cuts, he was armed with a unique perspective and experience in life, starting in Australia, with a never-ending pursuit of perfection. It was this pursuit that lead him to the sourcing of his own rough diamonds (after carefully examining the colour and cuts of the stones presented to him by suppliers, he realised they did not realise their full potential). This pursuit for perfection is something he carries with him throughout his journey. No jewellery creation will be presented unless it has realised its full potential.

A pioneer in the diamond and jewellery trade, Omnia Diamonds has been named the for the outstanding use of platinum in Australia, Scott has vested interest and involvement in all areas of the business is one of the major contributors to the company’s success.

Diamonds were formed over 3 billion years ago, deep within the Earth’s crust, where conditions of extreme heat and pressure cause carbon atoms to crystallise. This formation happens 150 - 200km below the Earth’s surface and under these conditions, molten lamproite and kimberlite (magma) are also formed within the Earth’s upper mantle.

Here, it expands rapidly, causing the magma to erupt and forcing it towards the Earth’s surface. It moves at an incredible speed, forming a pipe as it moves towards the Earth’s surface, and takes diamond-bearing rocks with it. As it cools down the magma hardens and forms kimberlite and settles in vertical structures known as kimberlite pipes. These kimberlite pipes are the most significant source of diamonds, yet only 1 in 200 are estimated to contain gem-quality diamonds. It takes over 100 tonne of earth to find 1 carat of gem-quality diamonds. Once discovered here, the Omnia Diamonds diamond’s journey has just begun 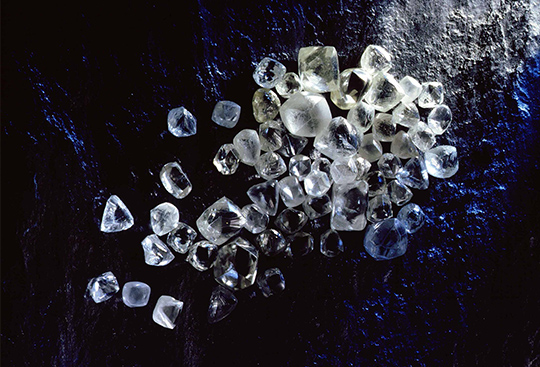 Regular trips are made to South African mines, where only top diamonds are hand-selected for Omnia Diamonds from the mine production, known as the run of the mine. The selection process can take up to three days. With specialised equipment, laser mapping, 3D scanning and optical tools, combined with skill, experience and the most advanced tool of all – the human eye, only the finest rough diamonds are selected.

A tiny window is polished to allow a better view into the inner diamond, which lays the foundation that determines how the diamond will get cut and polished, to maximise its true potential. The process of cutting and polishing a diamond that will yield 1 carat can take 3-5 days. There are over 30 checkpoints along the way, to ensure precision, alignment and proportion, which transforms the diamond from rough to a beautiful display of sparkle and light. Once it is complete it is assessed and graded in compliance with international diamond grading criteria, known as the 4 C’s

With over two decades of crafting and creating beautiful jewellery, Omnia Diamonds has expanded to include online direct wholesalers. Each hand-selected diamond is cut, polished and set to perfection in Omnia Diamonds’s workshops in Surat India.

Respected world-wide for innovative design and superior artistry, Omnia Diamonds has become one of the most recognised and revered jewellery brands in Australia. We have the ability to create the jewellery creation that speaks to your heart, be it from one of our original collections, or a bespoke creation to suit your unique taste.

Whether it’s an engagement, an anniversary, a special milestone, or a “just because” celebration, life is never short of meaningful moments. Omnia Diamonds is still in the early stage of its journey, with its eyes set on the international market. We aspire for our jewellery to be worn by people who understand the special moments in their life, worldwide. The quest for perfection is never-ending, and we believe that the best is yet to come.